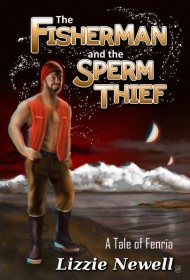 This winning science fiction romance, set on the planet of Fenria and revolving around a seafaring civilization with three women for every man, is powered by vivid —and visionary—world building.

Teakh Noahee is a young fisherman who is laid low by a broken ankle. While recuperating in a hospital, an alluring woman offers him “hospitality” and, along with two other female companions, seduces Teakh. Although his sperm legally belongs to his clan—it’s invaluable on a planet with so few suitable men—the virginal fisherman is overcome by the carnal experience of this group sex (and particularly by the mystery woman he nicknames Angel) and eventually ejaculates. When he realizes later that, according to the mythic Noah Code, he has the genetics of the perfect man and father—“a man innately monogamous and altruistic”—he understands that the angelic woman he has fallen in love with, a specialist in “sperm acquisition,” may have just robbed him of something much more valuable than his heart.

As Teakh attempts to learn not only who the mystery woman is but also her motives behind the theft, he becomes entangled in an existential crisis: If his genetics are so valuable, why is he a lowly fisherman when he could be a well-paid stud?  Yet if he wants a monogamous relationship, how can he in good conscious become a stud for hire?

Fortunately, however, the novel’s noteworthy aspects overshadow such issues. The narrative delivers a rich backstory, exceptional world building, and a well-plotted storyline. Overall, readers will find a satisfying story that is both entertaining and thought-provoking —exactly what first-rate science fiction requires.