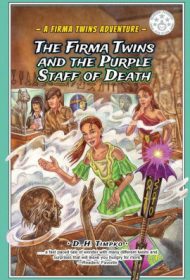 In D.H. Timpko’s middle-grade novel, pre-teen twins discover that it’s up to them to save the world from evil aliens.

Isis and Electra are identical twins. On their 12th birthday, Isis learns from a talking mummy in a museum that she has inherited mysterious powers and responsibilities. “It is your time to act, Isis Firma,” the mummy says. “You are the Wielder. You must be ready to lead the battle. You must find the Purple Staff of Death.” The mummy also tells her that the “Vympyrym have arisen,” and that the “Squrlon are in danger.”

As the story unfolds, readers learn that the Vympyrym are an evil, secret race of aliens that look like giant, shape-shifting rats and are enemies of the Squrlon, a second alien race, shaped like squirrels.

Eventually, Isis, Electra, and their friends Phoenix and Kelly find the Purple Staff of Death, a wooden staff that holds special powers. It helps save the day when Electra is kidnapped by the Vymprym and her sister and friends race to the rescue. Before the story concludes, the twins learn important family secrets.

The plot includes a gray squirrel who wears a purple sash, a woman dressed in Native American clothes who seems like a vision (but is she real?), a flute that can control the actions of the Vympyrym, a magic ring, a talisman, a mysterious limousine, and much more. Indeed, it’s so overstuffed with strange elements that their purposes and backstories are hard to keep track of.

Additionally, although Isis and Electra are well-defined characters, their friends are indistinct sidekicks, and the story contains many puzzling moments. For example, when Isis is in the hospital recovering from a concussion, she inexplicably talks with a lisp: “Phoenix has teth tomorrow in Mr. Jack’th clath…”

Ultimately, the story never coheres into an intelligible whole. While the idea of twins battling evil is promising, this novel requires simplification and greater clarity to appeal to young readers.