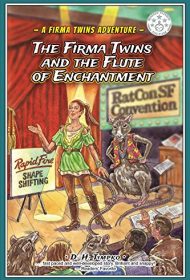 The Firma twins resume their battle against the evil alien Vympyrym in the second of D.H. Timpko’s middle-grade series, The Firma Twins and the Flute of Enchantment.

In the first book, identical twins Isis and Electra found the family artifact with supernatural powers, the Purple Staff of Death. This story picks up with Electra practicing figure skating. She’s crushed when her father quashes her dreams of skating in the Olympics, citing the unfair advantage of their distant Squrlon heritage (which enables shapeshifting, among other powers).

When the Firmas discover that the Vympyrym, aliens that take the form of giant, shape-shifting rats, are hosting the massive science-fiction convention Ratcon, Electra puts that “unfair advantage” to work, shapeshifting into a Vympyrym to infiltrate Ratcon and attempt to retrieve a second family artifact, the Flute of Enchantment, which can be played to entrance the violent, blood-drinking Vympyrym.

With her best friend Kelly, Electra quickly befriends the young Vympyrym Pricklethorn, who takes it upon herself to serve as Electra’s guide. When the plans to retrieve the Flute of Enchantment go awry, Electra must enchant an entire roomful of Vympyrym, including her new friend, holding them all off until help arrives.

This story coheres better than the first adventure, which suffered from too many confusing plot elements. Unfortunately, the action is significantly slower, with most of the narrative exploring the convention and its parallels to an ordinary science fiction convention, complete with filking, panels, and a costume contest—all parodied in a way that seems tailored more for adults than middle-grade readers.

Additionally, while the protagonist spends the entire novel becoming tight friends with Pricklethorn, she easily shrugs off her friend’s tragic fate at the novel’s end, which is jarring and disconcerting.

Although more accomplished than the first book, the story’s intended audience remains unclear. Dark themes conflict with the storytelling’s innate silliness, making it potentially challenging for younger readers while lacking the depth or nuance older readers might prefer.