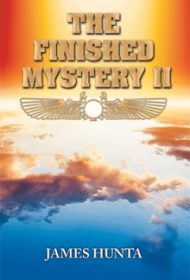 In this sequel to The Finished Mystery, Australian native James Hunta taps into the fundamental conflicts between the world’s religions, couching these debates in what is nominally a thriller.

The novel opens with a prologue criticizing religious extremism and denying evolution is a fact. As the story opens, Terry Graham is watching a video that purports to show the death of his daughter Ally’s boyfriend, Dave Marshall, by terrorists. Through flashbacks, we learn that Dave’s family was kidnapped by Al Qaeda in Saudi Arabia, and that Ally pled for his life. This first third is slow-going as we listen to naïve Ally’s internal monologues about what Christianity means.

The second half picks up a little as it leaps back nine months to show how Dave, his sister Sally, and his parents came into peril. With a few exceptions, the terrorists are stereotypical villains. “No one will take her pious words seriously because our world does not work that way, there is no room for love!” says one. “The only way to get attention is through violence, terror and the blood of infidels!”

The exceptions are conflicted terrorist Ibrahim Said, known as Sam, and his little sister Samahr, or Sunny. Both characters carry self-doubt about their faith and can debate their feelings with some nuance. By the time Sam is holding a sword over Dave’s head, he faces a terrible choice.

While the conceit is promising, the book suffers from a superficial and didactic approach.  The characters are largely cardboard archetypes, the religious evangelization seems self-serving and heavy-handed, and the writing, with huge blocks of expositional text, is awkward. Unnatural dialogue between two diverse cultures, a glacial pace and arcane religious lore shoehorned into the narrative add to the storytelling issues.

As a text for Christians to open a dialogue about their religion, the book may have some value, but as a thriller for general readers, this sequel Is likely to have limited appeal.