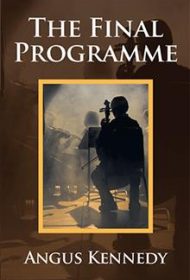 Angus Kennedy’s The Final Programme delivers the conclusion to the author’s Out of Solitude tetralogy.

In this story, Australian wine writer Andrew Johnson wakes from a coma in Sidney, Australia unsure of his surroundings or how he got there. Andrew struggles to find a way to move forward with his life and embarks on a quest to reconnect with his lost love, Niki, a Croatian woman who believes him to be dead. The character’s journey takes him back through the events of his past and eventually into an unexpected future.

Kennedy displays a deep familiarity with Southeastern European history, which he interweaves expertly throughout Andrew’s exploits. He also shows himself to be a knowledgeable oenophile in his discussions on wine. The author’s third book in the series had been criticized by a few for including too much detail about the history of California wine and not enough about plotlines from previous novellas. Kennedy amends those issues here by utilizing coma-induced memory loss as a literary device that forces Andrew to painstakingly piece together his past and to avoid an excess of wine as part of a new “strictly regulated” diet to counteract the physical trauma he has suffered.

Unfortunately, Andrew’s recovery from memory loss and the resulting summary of past exploits takes up a substantial portion of this already slim volume. Since all four books in Kennedy’s series are relatively brief, a better tactic might have been to compile his tale into a single account, wherein it would no longer be necessary to revisit the plotline of previous books. Meanwhile, narrative contrivances such as amnesia and characters thought wrongly to be dead do a disservice to Kennedy’s considerable skills as a writer.

Because much of this story rehashes narrative from Kennedy’s previous offerings, readers may choose to read the fourth and final volume as a standalone synopsis. However, as a complete series, the final volume seems to add little to story.