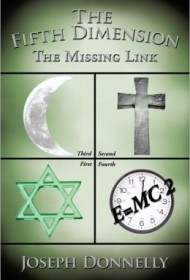 Joseph Donnelly is a dreamer of High Purpose. He characterizes these 727 pages of closely spaced fine print as “an epic work” whose blend of science, political theory and religious fervor achieves “historic significance.” A Dublin-born Irishman, Donnelly clearly means to change the world.

But clarity stops there, alas. Written in a murky variant of English employing familiar vocabulary but few vestiges of grammar, syntax or logic, The Fifth Dimension ostensibly seeks, among other things, to improve upon Darwin, explain the demise of Communism and the death-wish of Islam, hold forth on time travel, decode the mysteries of the Shanidar caves (where Neanderthal skeletons were first discovered), lament the Vietnam war, and assure every human on earth that we are all one “specie” [sic] under God that had its origins in Africa. Even if the alert reader allows for the usual density of philosophical discourse, the confusion this writing presents can be overwhelming. To wit: “In using our three taken prospect in direct overlay to the two main features of our drive and or influence to be upon us all within our own lifecycles is totally unavoidable.”

The book seems to be making a case for global brotherhood, an end to armed conflict, the triumph of religious harmony and some transcendent grasp of the cosmos. Good ideas all, but the narrative does not make sense of them. Instead, it offers passages such as this: “If I take to the unrefined emotion, and I do, that we each hold to thought and reasoning, then that done eclipses any element of experiment. Because in experiment although using many different properties they are all bland, none can breath [sic], unless mixed so by experiment, which bears to a planned ending anyhow, just like from evolution!”

In sum, it’s hard to imagine even the most dauntless reader reaching the final pages.