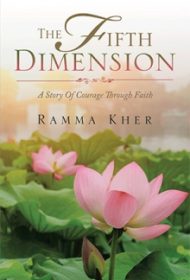 Ramma Kher has drawn upon her own culture and life travels to create her debut novel The Fifth Dimension: A Story of Courage.

When bright-eyed young Meera marries handsome Mojit and moves with him from India to Canada, she expects the life of a typical Indian immigrant’s wife. Soon, however, Mojit is tragically killed, and Meera faces another tragic death: her friend Jane’s suicide. Meera has promised to raise Jane’s son, Rishi, as her own, and this preamble forms the story’s backdrop as Meera and Rishi travel between Canada and India over three decades.

Kher tells Meera’s and Rishi’s personal story as they interact with family and friends in both countries, focusing on Meera’s struggle as an adoptive mother of a difficult child. The setting moves from the 1950s to the 1980s, allowing Kher to highlight important Indian events during that era, including its separation from Pakistan and the rise of leaders Nehru and Gandhi.

Readers will also learn about Bengali Indian culture, as Kher uses foreign terms and offers their definitions within the same paragraph. (While edifying, this may feel clumsy to some readers.) Other cultural norms are revealed in family and friends’ reaction to Meera’s adoption of an Anglo child, and Meera’s family’s reaction to her romance with a married man.

Overall, Kher delivers a lyrical writing style, and readers will appreciate her authentic vocabulary, but the narrative’s historical aspect can feel rather heavy-handed at times. Also, the book often shifts in time without clear demarcation, creating confusion for readers. In one example, Meera encounters childhood friend Vineet in a coffee shop and the next paragraph transports readers to a conversation between the two decades earlier—but it takes several sentences to establish the time switch.

The novel’s issues may deter some. However, readers who enjoy family sagas about a sturdy heroine might appreciate this tale, and those interested in Indian culture will find an accurate, respectful portrayal of that society.