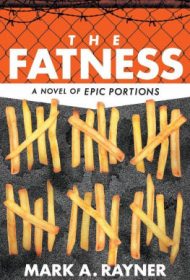 Mark A. Rayner envisions a Canada where the government essentially imprisons its clinically obese populace in his new satirical novel The Fatness, which comes with the winking subtitle A Novel of Epic Portions.

As with the other “inmates,” Keelan Cavanaugh isn’t technically required to remain in his local Calorie Reduction Centre (CRC), but unless he can get below a body mass index (BMI) of 30, leaving would make him lose his government-funded health care. As the book begins, Keelan has failed to hit that weight for almost a two-year stay and is contemplating having a leg amputated just to make the mark.

That’s the jumping-off point for a tale that weaves in government corruption, the economics of mass incarceration, privatization of prisons (even the speculative “fat farm” variety), and criminal prison enterprises. There’s also romance, as Keelan falls for a lawyer whose own lifelong battle with the scale adds resonance to their relationship and eventual quest to bring down the CRCs.

Between chapters, the author includes facts and myths about obesity, health and weight loss, and quotes on the subjects from various writers and thinkers.

Rayner delivers amusingly outlandish characters, such as an obese prison gang leader who rides a mobility scooter and a seemingly vapid (at first), razor-thin “calorie supervisor” named Brittany. There’s witty dialogue as well, as when Brittany introduces Keelan to her “Freedom Fries” plan—and he learns it means freedom from being able to eat French fries.

Still, the novel reads more as a bitter indictment of fat shaming than it does satire. The book’s predominant premise and philosophies—lean doesn’t necessarily equal healthy; it’s not shameful to struggle with your weight; powerful interests want to keep people fat, etc.—are clear from the opening chapters, and the rest of the story delivers only fleeting moments of deeper insight.

Despite this, Rayner offers a mostly pleasant read, thanks to an interesting premise, likeable characters and just enough humor to make it palatable.