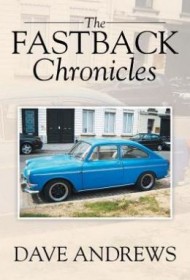 In Dave Andrews’ story, The Fastback Chronicles, Tommy Sherman is no teen angel, just a normal, thrill-seeking 18-year-old trying to find a girlfriend while deciding what to do after high school graduation.

Andrews sets his novel in Southern California and writes from the perspective of Tommy. While there aren’t dates at the start of each chapter, the book reads as if the events recounted are diary entries nonetheless. For example:  “Shortly after noon on the 14th I sat at the bus stop thumbing through the latest issue of Bomp!, a musical publication.”

The chronicles begin late fall of 1977 and continue to September 1979, as Tommy shares stories about cruising, girl chasing and descriptions of his job at a fast food restaurant. His best friends are Chet and Chris, and the group’s main modes of transportation are their parents’ cars and Tommy’s moped, until Chris gets a 1966 light-blue Volkswagen Fastback and the boys suddenly have their freedom. This leads to plenty of trouble, including theft and speeding.

Unfortunately, none of the stories detailed here are very captivating because they are written like a day-to-day report of Tommy’s life, rather than with a purposeful narrative arc. As such, far too much emphasis is placed on superfluous minutiae, such as:  “On the 19th Anthony and Lester repaired the throttle cable. The night shift at work seemed to go a lot smoother with Kenny Packett supervising. We had one person closing the front line, one in the back, and I did the washing. We got out at a surprisingly early 11:45.” Most of the activities are glorified, rather than offering the sort of layered questions and implications that make a story engaging.

References to music and areas surrounding Los Angeles offer some appeal, and it’s fun to look back at carefree days, but the narrative’s mundane writing and lack of a real plot is likely to seriously impede reader satisfaction.