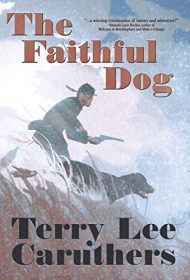 This middle-grade historical novel opens in the early days of the American Civil War and largely follows the adventures and misadventures of a dog.

Late in 1861, a family of German immigrants in Chicago is in turmoil as the patriarch, Louis, prepares to join a Union regiment being assembled by the family of his wife Elizabeth, who is consumed by doubts, while their daughter Louisa, 5, is thrilled by her father’s coming adventure. All of this is observed by the beloved family dog, a pointer of uncertain breed named Bärchen.

As Louis heads off to join his unit for training, Bärchen leaps to his side and eventually becomes the regiment’s mascot, exploring the camp and engaging in his own adventures, such as rescuing a child from the hooves of a galloping horse, battling a wild boar, killing rats, and so on.

Mostly, though, the dog remains close to its master as the regiment gets deeper into the fighting, culminating in the battle of Shiloh in the spring of 1862. In the aftermath of that slaughter, Bärchen performs his last act of obedience to his master, which serves as the novel’s most telling justification of its title.

While the story offers an accurate picture of one unit’s participation in the Civil War’s chaotic early days, it’s primarily a tale of devotion and comradeship between human and animal, told from the dog’s vantage point. This choice is unfortunate, as frequently, just when the story gains momentum, the plot stalls while readers follow Bärchen’s mundane activities: snapping at rodents, exploring in the snow, sniffing out new smells. This becomes distracting and kills any growing tension. Readers may wish the author had focused solely on the war itself.

Still, a younger audience might relate to Bärchen and learn about the war along the way. An Author’s Note includes contemporary newspaper accounts and information on the real events on which the story is based, providing an interesting sidebar to the story.