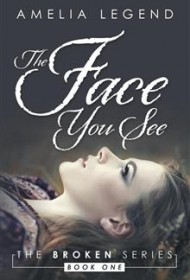 This unsettling and complex YA romance novel set in northern California explores a teen’s experiences with physical and emotional trauma, including domestic violence.

Using a stream-of-consciousness approach, the story relates events Rashomon-style, from the perspective of the main characters: Dannie, Reed, and Nick. Dannie is a resilient teen who escapes from her abusive home environment by reading books. She is content to hide her emotions from others because she feels abandoned by her father and betrayed by her mother and a former high school boyfriend. When she meets Reed, a new student at her school, however, she begins to form a connection with the country boy.

But after a run-in with her ex-boyfriend, her instinct is to retreat from Reed: “This is exactly the heartache I never want to feel again. I relish in the anger I feel as it slowly replaces the pain.”  She is easy to root for as she struggles to let herself love Reed. Meanwhile, fellow student Nick is also attracted to Dannie, adding complications to the story.

While Dannie is an effective character, Reed and Nick are less successful. Dark elements in Reed’s past are never fully explained, resulting in confusion about his emotional state and an ending that feels unresolved. And Nick’s character, the darkest of the three, is also underdeveloped, with motivations that can be hard to understand.

By focusing on telling about previous events through the eyes of these characters instead of showing the interactions as they occur and using more active dialogue, the author creates a story that doesn’t fully engage or progress. Readers learn about the same events through different eyes, but additional details aren’t provided in each telling, making the narrative seem repetitive.

Such factors impede the novel’s overall effectiveness. Still, fans of the genre and those who have experienced or overcome traumas will find Dannie relatable and empowering and may appreciate facets of this story.