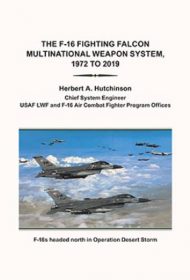 This enormous (81/2 X 11, 458-page) book recounts in exhaustive detail the design, testing, manufacturing and ultimate combat usage of one of the most successful jet fighters ever developed, the F-16 Fighting Falcon. It is simultaneously a highly technical manual and a remarkable memoir.

After serving as an Army officer during the Korean War, where jet fighters first replaced propeller-driven aircraft, author Herbert A. Hutchinson spent over 20 years of his professional life as Chief System Engineer for the creation of a light-weight, low-cost, highly-maneuverable fighter aircraft. This required not only technical skill but political acumen. For example, at one point, the US Navy (USN) decided to go with a twin-engine version of the prototype, due to the increased survivability of twin-engine aircraft in a naval-combat environment. But for political reasons it never directly voiced, the Navy took issue with certain design features. Hutchinson’s team had to defend those features during delicate negotiations, while avoiding antagonizing the USN.

Regarding the book’s technical aspects, the author’s aim, he notes, was to describe the development of the light-weight-fighter advanced technology demonstrator, the transition contracts to produce and “missionize” it into a “multi-mission-capable, Air Combat Fighter,” and the modifications that went into making the various production models “the cornerstone of twenty-five nations’ air forces.” These goals are all exceedingly well met.

Brimming with outstanding full-color photos, (such as the inside view of the cockpit and heads-up combat display taken during flight) and myriad explanatory charts and graphs that clarify and explain both nuts and bolts construction and theory (like Boyd and Christie’s ground-breaking energy-maneuverability comparison of light-to-heavy weight fighters), the book has satisfied every conceivable wish of readers seeking comprehensive factual attentiveness to the subject.

For non-technical readers, what the author describes as “the stream of information” that he relentlessly pours out, and, at one point, jokingly admits might lead to loss of consciousness, will certainly be daunting. While the writing style is logical, it’s somewhat repetitive.

For the dedicated aeronautical engineer, however, this book will prove invaluable.