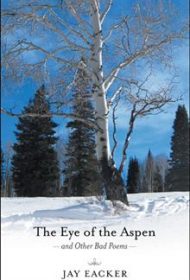 The speaker in Jay Eacker’s The Eye of the Aspen is an affable older man who contemplates the natural world, his family, hobbies, and memories of childhood throughout these 52 rhyming poems, delivered with a sly wink and a nod to their defects. As the author notes in the second poem titled “About Bad Poetry, or, Doggerel,” “Now that you know/ What these works are about,/Don’t say you were not warned/ And pout.”

Readers will find themselves smiling at many of these quick-hit poems, as Eacker writes about experiences they can relate to with a disarming sense of humor. For example, in “The Rustic Inn,” he writes of checking into a motel that has no elevator—and other inconveniences: “Our room was on/ The third floor./ Getting there/ Was quite a chore.// Once inside,/ We looked around,/ And a toy toilet/ Was what we found.// Using it/ Was a breeze/ With your chin// Upon your knees.”

Sometimes, he turns more serious, relaying his nostalgia for younger days. In “Dream House,” for example, the speaker talks of a house by a creek, where he lived for 15 years. “Our lives had changed./ It was time to move on/ Many dreams of our youth/ Had come and gone.”

Eacker is right to warn readers that he’s not aiming for sophisticated work here. His rhymes are predictable. And his diction and syntax are often stilted in order to complete a rhyme (“On our way,/ The other day,/ At a motel/ We had to stay”). Such convolutions can make the work hard to understand—an unfortunate obstacle in poems meant to be fast reads.

Still, it’s hard to knock a poet who admits his own limitations, and Eacker’s self-awareness of his artistic failings is charming. This is a breezy book meant to be taken in the spirit in which it is delivered. Those looking for a lighthearted read will enjoy a chuckle or two in these “Bad Poems.”