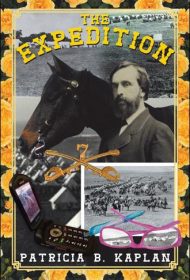 Patricia B. Kaplan’s novel finds a retiree and avid horsewoman (also named Patricia Kaplan) transported back in time to 1873 Montana, in the middle of Custer’s army camp.

As the book gets underway, Patricia awakens disoriented, under the care of the camp doctor, Sidney Johnson. He’s baffled by her T-shirt (which features quotations from the book 1984) and her cell phone and intrigued by her retractable pen. After some talk at cross purposes, Sidney realizes Patricia truly is from 2018.

The novel follows Patricia as she acts as Sidney’s assistant while the camp prepares for its Yellowstone Expedition. Through grisly work, such as treating venereal disease and tuberculosis, Patricia bonds with her young charges, dazzling them with accounts of 20th- and 21st-century pop culture. She and Sidney also develop a romantic relationship, despite her being married in 2018.

The Expedition begins with an intriguing premise, made especially poignant because many of the men Patricia encounters will die a few years later at Little Big Horn. Readers will also enjoy seeing Patricia apply her equine knowledge to the situations she encounters.

Unfortunately, the novel’s execution falters. Patricia’s frequent bull-in-a-china-shop antics—such as touching Custer’s hair when they first meet—grow exhausting, as do her near-compulsive references to Gilligan’s Island and other modern cultural artifacts.

Despite the book’s length and Patricia’s first-person narrative, her character feels underdeveloped. For instance, her narration makes it clear she was traumatized by the September 11 attacks, but this is never fully explored. Replacing pop culture talk with more introspection would greatly improve the novel.

The story takes a gripping turn in its last pages, beginning to explore the nature of time travel and how Patricia experiences it. But then it ends abruptly. Spreading this information throughout the story and further developing it would lead to a richer reading experience.

Overall, despite some engaging elements, The Expedition needs substantial revision before it’s likely to appeal to general readers.