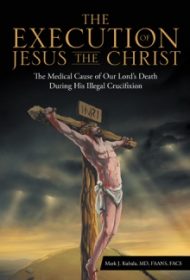 For years, scholars and researchers have speculated that Jesus died of asphyxiation brought on by the weight of his own body while crucified to a cross. Author Mark J. Kubala begs to differ—and he should know. As a neurosurgeon for over 50 years, Dr. Kubala knows a thing or two about the human body and how people die. In The Execution of the Jesus the Christ, Kubala examines the Gospels to propose a new theory on a cause of death.

Kubala approaches his study not only as a doctor, but as a man of faith. He opens his book with a quick, informative overview of biblical history as well as a summary of Jesus’s last days—from his entrance into Jerusalem, to the Last Supper and his Passion. Along the way, he highlights the political tensions of first century Palestine; examines Jewish ritual sacrifice; speculates on what Jesus may have eaten before he died; explores the rare medical condition hematidrosis, or the sweating of blood, and proposes that depression and mental stress caused by the foreknowledge of his impending crucifixion may have exacerbated the wounds he suffered during his torture by Roman authorities.

Kubala believes that the damage to Jesus’s muscles and flesh and the steady loss of blood “primarily from the crowning of thorns” would have released high levels of potassium into his circulatory system, which didn’t cause asphyxiation, but cardiac arrest.

Though all of this is speculation (after all, there’s no body to examine), Kubala’s book is intriguing, educational, and easy to understand. Well-researched and supplemented with helpful illustrations, it offers an interesting historical portrait of Jesus and a compelling examination of the human body and how it deals with trauma. Kubala’s matter-of-fact style of writing suits the topic well, leading readers step-by-step through the processes the body experiences before death.

Equal parts faith journey and forensic investigation, this book offers a unique take on Jesus’s suffering that readers will appreciate.