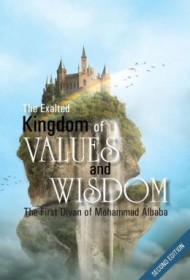 The Exalted Kingdom of Values and Wisdom: The First Divan of Mohammad Albaba is authored by Mohammad Albaba, who was born in the countryside of Damascus in Syria. As a child and college student, he lived in Saudi Arabia and eventually moved to Canada where he worked as an engineer.

In his Preface, Albaba states that he will present “four themes—love, family, storytelling, and personal experiences.” The overarching topic in almost every poem is the author’s Islamic faith.

Each poem is preceded by a preamble; those that explain Islamic and Arabic cultural and literary history are interesting and helpful. Many poems exalt Allah, as explained in the preamble to “Lean on God,” in which Albaba discusses the transcendent nature of this love: “The greatest love I have in my heart is for God the Almighty, my Creator and Sustainer.” The poem is typical of Albaba’s work in that it uses simplistic rhymes (“souls” rhyming with “goals,” “hearts” with “parts,” etc.), overly familiar metaphors, and an unquestioning worship of the strength, goodness, and protection of Allah: “As long as You are with me, / I can face the stormy sea…”

The strongest poem, “Omar and the Abused Copt,” is based on Islamic history. It’s a tale of justice revolving around a governor of Egypt, his son, and a Christian Copt. Albaba brings the action alive through his use of kinetic imagery: “Contestants then rushed headlong toward the finishing line. / About the participants the dust rucked up in clouds,/ … Like an arrow he flew swiftly to his targeted end.”

Such highlights are rare, however. The overall mode of this book is didactic, and the language is mostly ordinary and prose-like (“I want to thank you deeply/For being so caring and friendly….”). Those who share Albaba’s faith might be interested in this book, but others will want to seek out more engaging work on this topic.