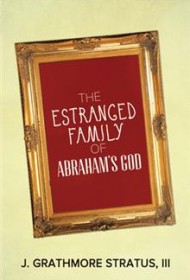 It’s sadly ironic that three of the major world religions, Judaism, Christianity, and Islam, which preach the ideas of love and obedience to the same God, have a rather difficult time getting along. In ancient and modern times, fighting, murder, wars, and terrorism have been just a few byproducts of a sibling rivalry that continues to have detrimental effects on society at large. The Estranged Family of Abraham’s God, by J. Grathmore Stratus, III, examines some of the historical and theological reasons for this constant division and what might be done to assuage all parties involved.

Much has been written about this topic, most notably Bruce Chilton’s recent book Abraham’s Curse. But what Stratus does well is approach his material with a sensitivity, openness and thoughtfulness that are both refreshing and rewarding for readers. Though not a therapist, Stratus, who holds a degree in international relations and commerce, looks to not only educate but to serve as a peacemaker.

Several flaws inhibit the book’s overall success, however: First, although the book is not meant to be an exhaustive text (it’s only 122 pages) Stratus could have gone into more detail about the historical origins of each religion, including geographic and social-economic factors, to help readers understand the three religions more clearly. Second, the author needs to work on his transitions (see page 21, where the author’s observations and those of Chuck Swindoll and Dave Carder aren’t tied together). Third, although the author has a simple and avuncular style, the book could use more stringent editing to avoid repetition and streamline his prose.

Finally, the book relies a little too much on Wikipedia as a source for historical fact. Though the people’s encyclopedia gets better every day, it’s use in a book could suggest just a cursory understanding of the material, thus undermining the author’s authority.

Overall, Stratus’s book is thought provoking, but it needs more refining before it’s ready for a general readership.