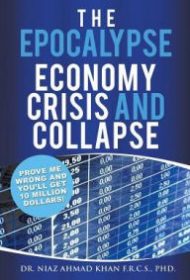 Niaz Ahmad Khan explains his plan to restore the U.S. economy in his book The Epocalypse: Economy Crisis and Collapse.

Khan has offered suggestions for reviving dormant economies before; his past publications have addressed economic issues in Greece, India, and the world as a whole. Here, Khan attempts to refine some of the concepts previously explored and apply them to the United States.

One of the book’s fundamental problems is that it presupposes a problem that no longer seems to exist. The first page presents a visual of “How to Restore the US Economy.” Khan discusses stopping and reversing recession, but according to the U.S. National Bureau of Economic Research, the most recent U.S. recession began in December 2007 and ended in June 2009. The book’s title also stirs emotion, implying that the “Economy Crisis and Collapse” is immediate. But there’s only a brief, unconvincing case made for replacing the current model with a new economic system, as Khan lists well-known, ongoing issues in the U.S. economy, like lower-income wage stagnation, infrastructure needs, medical and pension costs, and more.

Khan’s plan for revising the economy requires consumers to buy and sell vouchers, but many of the hard details about successfully implementing such a system are glossed over in favor of predictions that his system will eliminate taxes, terrorism, and drug abuse:  “THE OBVIOUS BENEFIT WILL BE NO MORE POPPY CULTIVATION IN COUNTRIES WHICH ARE POOR AND LARGELY DEPEND ON THE POPPY CROP. NOW THERE IS NO MORE POPPY AND NO MORE DRUGS.”

An editor or proofreader would have helped considerably in making Khan’s points clearly; one cause of confusion throughout the book is that Khan refers to his Mutual Benefit Bond System as “MBBS” in the text, while many graphics dub it “MCBS.”

Despite its shortcomings, The Epocalypse offers bold ideas for those interested in not just tweaking the current U.S. economic model, but developing an entirely new one.

Also available in paperback and ebook