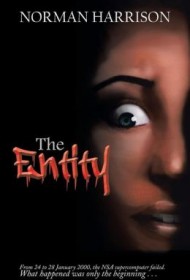 Norman Harrison’s techno-thriller, The Entity, makes sentient computers like HAL 9000 from 2001: A Space Odyssey seem harmless. Harrison has created a fully developed, power-hungry artificial intelligence known as Phoenix, who has dramatic plans for the planet. What the seemingly all-knowing intelligence has underestimated, however, is the drive and creativity of humans to thwart the power-hungry quest.

Enter FBI Agent Jake Carbine and Special Agent Liz Young, eager to solve the suspicious deaths of several prominent scientists. Harrison deftly switches perspectives between several characters who have received cryptic communications from the Phoenix. His detailed portraits bring each of these characters to life: a sniper ruthlessly stalking her quarry; a media maven looking for the next big story; the FBI agents exchanging sexually-charged banter as they scramble to prevent more deaths. Harrison is expert at prolonging suspense; he’ll have you watching the doorknob in Liz’s apartment very closely for any sign of movement.

However, the book has a few issues. Harrison changes venue frequently, moving from Washington, DC to Paris, London to New York City at a breathtaking – and confusing – pace. No timeline is provided, so it’s tricky to figure out what’s happening simultaneously and what’s moving the action forward. Individual scenes are tight and suspenseful, but the larger story lacks a real sense of mystery because readers are clued in early on about Phoenix’s origins and evil intentions.

Likewise, the preposterously simple solution to the Phoenix problem, after all the mayhem and destruction, is just too pat. However, Harrison intimates that the solution is only a temporary one. Fans may find a more satisfying finale by following Liz and Jake into the future in Harrison’s sequel: The Entity: The Doomsday Chronicles.