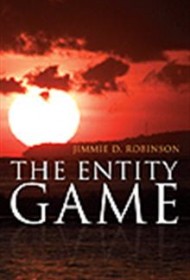 Bearing a striking resemblance to the television series and video game, Deadliest Warrior, this futuristic science fiction novel pits historical fighting factions against each other in a battle royal. Presented within the framework of Space Defenders attempting to save the universe from evil entities, the book is comprised almost entirely of scenes depicting violence, sexuality, and sexual violence, all of which provide sustenance for the entities.

Expressed as colorful rays of energetic light, each entity selects two favorite warriors for the battle. Powered by “male testerome [sic],” as noted on the back cover, they plan their brutal game by studying famous warriors, weapons, and strategies on holographic screens. Ninjas, Zulus, Vikings, Black Panthers, Hell’s Angels, Nazis, and the “Klu Klus Klan [sic]” are among the selected groups.

Magical clouds go back in time to trap the selected warriors, who are placed by groups inside large glass domes. Hundreds of beautiful women parade past the domes wearing high heels, lingerie, tight jeans, and wet T-shirts. Others are topless, bottomless, and nude as they move suggestively (eating “long bananas” and “pouring the beer all over their naked bodies”) to stimulate male hormones. Music and food also prepare the men to fight. A pink entity telepathically communicates with female Space Defenders so they can rescue the warriors, including their kidnapped male crew members.

In addition to the far-fetched plot with its sexist overtones, non-standard English and multiple errors in grammar, punctuation, capitalization, and spelling appear on every page. Incorrect word choices (“paste” versus “pace,” “personnel” versus “personal,” “jester” versus “gesture,” among others) appear repeatedly, and characters inexplicably change names. Additionally, actual people are misidentified:  Mick Jagger is referred to as “Nick Jager” and “Nick Jaguar”; the band Steppenwolf is written as “Stephen Wolf,” and Fuehrer, appears as “furor.”

Editing could improve this error-ridden novel, which might appeal to those who can ignore the flaws and enjoy testosterone-fueled action. As is, the book will have limited appeal.