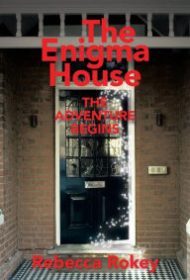 The Enigma House tells the story of two teenagers who unearth what lies behind the eerie paranormal occurrences in their home.

When the Miller family moves into an old Victorian house, teenagers Emma and Michael, and younger sister, Sophia, soon discover eerie paranormal occurrences: strange lights, voices, rooms that magically redecorate themselves, tin soldiers that become animated and march around. Is the house haunted? Are the strange beings friendly or dangerous?

Concerned for the family’s safety, the mother wants to move, but Emma and Michael set out to investigate what’s behind the mysterious happenings. They discover books with faces, who talk to them. Especially helpful is the talking journal of the home’s original owner. Bit by bit, the journal helps them discover answers.

The book seems aimed at the young adult market, as it mostly follows the children’s adventures (although their parents each have their own paranormal experiences: Jean has a magic helper in the kitchen and a morning room that transports itself and her back into Victorian England, and Henry finds an English pub—replete with a host of alien beings—that manifests when he feels the need for a drink).

The book is refreshingly free of demonic spirits, and one point in time bleeds into another. It’s an interesting concept that combines ghosts, time-travel, and leaps into parallel universes.

But the story-telling falls short of the promise. The adventures are too episodic, rather than tightly connected, and the modus operandi of having the talking journal interrupted just as it’s about to reveal some crucial information to Michael and Emma wears thin. The prose also suffers from too many adjectives, adverbs and verbs with “ing” endings, as well as spelling and grammar mistakes.

While these issues prove distracting, the story has many attributes. Readers will especially appreciate the author’s creativity and the imaginative world she offers here.