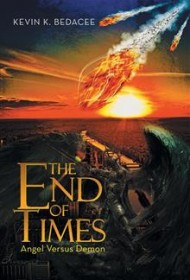 Kevin Bedacee uses a fairly familiar science fiction plot structure to kick off his debut novel, The End of Times: Angel Versus Demon.

The action begins in the year 2554, as military officials track the progress of an alien army that’s held at bay, thanks to a magnetic field maintained by a group of satellites orbiting the earth. It’s a setup straight out of countless ‘50s’ sci-fi flicks: Aliens are poised to attack, and the future of humanity depends on a group of grizzled, steely heroes to ward them off.

From there, however, the story takes unexpected and complex turns. Bedacee slowly offers a backstory for the invading aliens, a dense mythology that includes angels, demons and an apocalyptic struggle for the future of the entire universe. Through the perspective of ace American pilot Lance McDonald, his love Jessica Maverick and his fellow fighters and military superiors, Bedacee sketches out a story that’s ambitious in scope and complexity.

Unfortunately, his efforts only partially succeed. In weaving a tale that draws on an ancient race of aliens, an intergalactic sanctuary and a battle between angels and demons, Bedacee relies on an overly simplistic narrative style that never fully conveys the proper amount of drama. McDonald, Maverick and the other human characters lack depth, and by the time the real heart of the conflict kicks in after the first 100 pages, it’s still hard to feel properly invested in their fates.

The result is a debut that offers plenty of intriguing possibilities, but not enough payoff—particularly for casual readers of the genre or newcomers, who aren’t likely to find enough narrative punch to draw them into the story.  Dedicated science fiction fans, on the other hand, may feel there are enough twists on the traditional alien invasion story to make the read worthwhile.