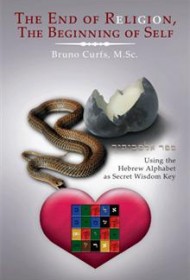 Unlike such languages as Italian, French, German, or English, whose primary function is informational, Hebrew has always been venerated as sacred – the living, breathing, and mysterious voice of God. In The End of Religion, The Beginning of Self, author Bruno Curfs seeks to explore the profound and enigmatic nature of the Hebrew alphabet in an effort to unlock sacred wisdom. His hope is that a new understanding of the sacrosanct will bring an end to the global violence and conflict that arises today in the name of the most Holy.

Mixing Talmudic and Midrashic teachings with Christian theology and Qabalah, Curfs examines each of the 22 Hebrew letters– from aleph to tav–and explains each letter’s meaning, its corresponding number, and its use in scripture. What the author seems most interested in is exploring the dual nature and paradox that lies at the heart of these Semitic symbols. For example, the letter cheyt, according to Curfs represents the memory and knowledge; aleph, life and death. For the author, acknowledging the tension between these dichotomies isn’t really tension at all. God is the God of all things and all creation–of light and shadow. Knowing this can lead all of us to a new level of consciousness and lasting peace.

Curfs’ book is interesting, ambitious (sans back matter it clocks in at over 670 pages) and dense. It has a certain rambling, free spirit of inquiry that is overall endearing; his poetic voice and insights are appealing. But sometimes Curfs has so much to say that ideas run into each other and bridges between thoughts are non-existent (editing could have fixed this and shortened the book by at least a 25-50%).

The book’s biggest problem, however, is Curfs’ use of footnotes, which serve only as asides and not citations of works sourced. In a book of this length and scope, this limits the project’s authoritative nature. How much of what we’re reading is Curfs’ own ideas and how much is rooted in history and fact? Many times it’s hard to tell. Unfortunately, this ends up being a major detriment to a bold idea of a book.