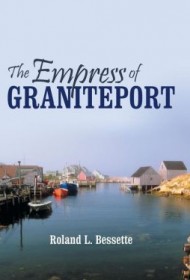 In this sprawling epic about a small fishing village in rural Maine, author Roland L. Bessette shows off the storytelling prowess that earned him high praise in his biography of Italian tenor Mario Lanza and an autobiographical novel about Ernest Hemingway.

The author posits Graniteport, Maine, as a small but crowded place, ruled by Ned Bailey. While set in the near past, Bessette refers to this world in kingly terms, with chapter titles such as “The Royals of Graniteport,” and “Court Intrigue.” It’s a macho world, where the lobstermen have been known to go to war against each other and make wild proclamations about justice in the name of “man’s law” — a community where anyone who’s not from “heyah,” is suspect.

At the heart of the tale is Roy Slade and his girlfriend Mae Horvath, who is not only an outsider but also a proud Chinese-American, disgraced by locals after her divorce from an ambitious local real estate baron. Tragedy strikes when Roy’s daughter and her husband, an FBI agent, come to visit. During an accidental run-in with a pair of drug dealers, the couple is tragically gunned down in cold blood. The murders bring a dogged FBI agent to town, where he must sift through the familial deceptions, arcane culture and long-held resentments that drive Graniteport’s residents to uncover the truth.

The novel’s prose can be somewhat dense and could have used a judicious trim. It is generally quite poetic, however, with a voice that strongly suggests the influence of Steinbeck’s Cannery Row, particularly in the beginning chapter. Thematically and stylistically, the novel bears a similarity to the cast-heavy novels of John Irving and Richard Russo, laced with the masculine realism of Ken Kesey’s Sometimes A Great Notion.

Although the novel is nominally about the evil that men do, this blue-collar fable is America writ large, with all the sins and saviors that a story this big requires. It should find a welcoming audience.