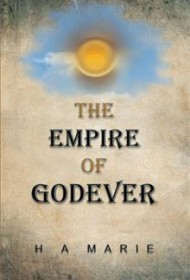 This fantasy novel, set in a world ruled by a supreme god known as Godever, isn’t so much a novel as it is a collection of loosely interrelated stories chronicling the misadventures of the gods and goddesses that rule over the eight kingdoms that make up the Empire of Godever.

The novel begins with several chapters that essentially constitute a large information dump: Antramani is the patroness of fire, soil, and landforms, and rules the kingdom of Andeterra; Perezon is the ruler of the kingdom of Perteris; etc. After the complicated pantheon of deities is explained, the author begins building upon that foundation with stories.

One tale involves Godever transforming two feuding gods into mortals and making them experience life in each other’s very different kingdoms. Another story involves a god named Zabufer, the patron of animals, who went against the wishes of Godever and stole a golden horse that was Godever’s gift to a newly married couple. Yet another story revolves around a god restoring a majestic river and saving an entire community.

As a whole, the novel suffers from several important flaws. The story lacks character development or description; all readers have to go on are the character’s names. Additionally, there’s a conspicuous lack of world building; none of the backdrops are described at all. Any good fantasy novel offers a magical sense of wonder: fascinating characters and breathtaking realms. The almost complete lack of descriptors in this story turns what could have been a highly imaginative narrative into one that is decidedly unexciting and two-dimensional.

But beyond the inadequate character development and world building is a writing style that is awkward and, at times, hard to follow. Here’s just one example: “They walk down the aisle on each other’s arms until their thrones on which they sit comfortably.”

Conceptually, this novel has much potential. Unfortunately, the flawed writing style and story development make for an unsatisfying read overall.