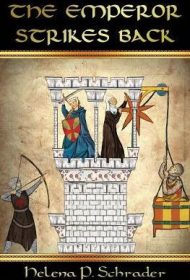 With The Emperor Strikes Back, Helena P. Schrader crafts a brilliant historical novel infused with a wealth of primary and secondary source material.

The second book in a series of novels covering approximately two decades of conflict between the emperor Frederick II and the “barons of Outremer,” The Emperor Strikes Back also functions as a stand-alone novel.  It captures one year in the struggle between the Emperor and the household of the Lord of Beirut (the Ibelins), namely 1231-1232.

Schrader imagines a rich and intricate novelistic universe in which historical fact blends with fiction to create a compelling narrative.  Set against the backdrop of the Christian struggle to retain the Kingdom of Jerusalem in the early 13th century, the novel offers both an engaging and informative read.

Although the plotting is quite intricate, Schrader maintains a steady pace that will enthrall readers as they are transplanted from one intriguing locale to another in the Outremer, which comprises the eastern Mediterranean.  Schrader’s detailed descriptions of these historical locations are entrancing, particularly those of the Isle of Cyprus and Beirut itself, “a lively city crammed with humanity from every corner of the Earth.”  Schrader helpfully provides a map of Outremer as well as a descriptive listing of the cast of characters central to the plot.

Considering the scope of Schrader’s work, her characterization is remarkable.  From central actors to more minor characters, each individual has a depth that will leave readers highly invested in the story’s outcome.  This is especially true for the love affair of Lord Balian, first son of Lord Beirut, and Lady Eschiva, a wealthy landowner and member of the Royal House of Cyprus.

Schrader has crafted a gripping read that will appeal to a wide-ranging audience, readers who are approaching this historical period for the first time as well as those already invested in stories of the Crusades.