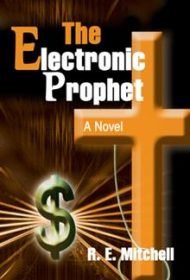 George Henderson grew up in the Bible Belt, but has no warm feelings for the Christian faith. A bitter sense of humor and the need to make a living lead him to take a job writing for traveling preacher Billy Jewell Jackson. George’s sermons propel Jackson to success as a televangelist. But an indiscretion leaves Jackson in disgrace and George out of a job.

Even more cynical than before, George comes up with an idea: a robot televangelist, whose sermons he will write. He arranges for funding and a TV studio and acquires a girlfriend, Terri, whom he meets in a bar and hires as a sound mixer. With the preparations in place, Reverend Sam, the robot preacher, is born.

Although a disclaimer stating that Sam is a robot runs at the end of every show, the android develops a devoted fan base that hangs on his every word. Some of them, known as Samites, believe that Sam is not only real, but a messiah. When George uses Sam to crunch some numbers for an ambitious congresswoman’s speech, the robot begins to go off-script. This makes the Samites grow only more fervent, and the government takes notice, leading George into a world of trouble.

First published in 2003, The Electronic Prophet feels fresh, relevant and not-too-improbable in today’s world. George’s smooth, deadpan first-person narration and the novel’s amusing twists will keep readers turning its pages. The story does have a couple of discordant notes: Terri’s teenage son feels like a gratuitous character, and George’s intense dislike of him seems unnecessarily mean-spirited. The novel’s epilogue also feels a bit over-the-top considering the story’s otherwise almost-plausible events.

Despite these relatively minor flaws, The Electronic Prophet should prove entertaining for fans of Christopher Buckley and other light-hearted satirists.