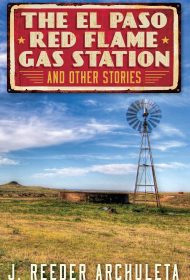 J. Reeder Archuleta’s The El Paso Red Flame Gas Station is a novella about love, loss, and reconciliation in 1960s west Texas told through a collection of interconnected short stories.

A latter-day western, the story weaves a rich tapestry from vignettes in the life of Josh, a fatherless boy subsequently abandoned by his free-spirited mother. This leaves him to fumble through adolescence with the sympathies of the grownups who look out for him, such as Sue Ann, a vivacious waitress who treats him like a little brother, and Rip, a hard-drinking, sharp-witted Korean war vet.

The stories are conveyed in lean, elegant prose reminiscent of Annie Proulx and Cormac McCarthy. At their heart, they are most often about regret. We meet women bent on escaping the confines of convention, men driven to murderous rage by betrayal or to fatal heartbreak by lost love, and more. But on the whole, The El Paso Red Flame Gas Station is the story of a boy assembling lessons from the battered optimists who help him grow up and learn to do the right thing. Simply put, it’s about a boy discovering how to be a man.

The novella succeeds on multiple levels. The stories can stand alone, but they combine into something greater than the sum of their parts. Archuleta’s characters are captivating: wise but never preachy, weary but not cynical. Their dialogue is distinctly laconic but swollen with subtext, and the world they reside in is sublimely rendered through expertly selected details. As Josh struggles with rage, for example, the author’s simple description of him sweeping the floor cunningly echoes the emotion: “The stiff bristles of the broom made crisp hissing sounds as they moved over the uneven concrete.”

Archuleta’s ability to distill a story to its raw elements brings a weight and depth belied by its brevity, and the universality of Josh’s journey gives it a timeless quality. The El Paso Red Flame Gas Station is a lovingly rendered portrait of a Texas life by a notable talent. Any lover of literary fiction, or anyone simply hungry for a good book, is sure to find sustenance in Archuleta’s prose.