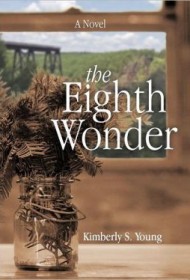 Kimberly S. Young offers a thought-provoking love story without relying on maudlin characters or excessive sentimentality in her novel The Eighth Wonder.

Young’s straightforward approach recounts the relationship between Nicole, 35, and Tom, an older, unhappily married man. Nicole has just received her doctorate and is teaching at a college in northern Pennsylvania. Tom is the director of a senior center and runs a nearby hunting camp. Their lives are clearly in different places, yet they catch each other’s attention and a brief, but significant, bond develops.

The Kinzua Bridge, known as the Eighth Wonder of the World before being destroyed by a tornado, is the story’s backdrop. The bridge was built in 94 days with a crew of only 40 men. At the time of its completion, it was the tallest and longest railroad bridge in the world. Tom’s passion for the bridge is a literal connection to Nicole as she grows to love its beauty, too. This metaphor may be a little heavy-handed, but it works; the brevity of construction is also part of the metaphor as it relates to Nicole and Tom’s liaison.

Young’s narrative is quick-paced and engaging, but a few missteps keep it from being truly remarkable. Given the small community in which the story occurs, it’s difficult to believe no one knows about the relationship. Also, the passage of time is inconsistent. After her mentor Carol befriends Nicole, for example, she seems overly comfortable in what appears to be only a few weeks. “Nicole didn’t even knock when she visited Carol anymore; she just came right in the kitchen and checked the refrigerator for snacks and beverages.” That friendship appears and disappears.

Fortunately, the novel’s emphasis is on Nicole and Tom. They are interesting and likable, personifying Tennyson’s words: “’Tis better to have loved and lost than never to have loved at all.” A satisfying story awaits those who can overlook the story’s minor flaws.