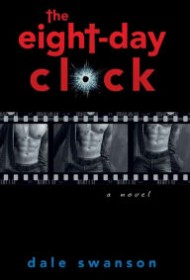 Dale Swanson uses blackmail, murder and mayhem to take a satirical look at politics, big business and Christian fundamentalism in his debut novel, The Eight-Day Clock.

Jimmy Campaglia is a private detective in Hillsborough County, Florida, whose hard-boiled persona seems to fly in the face of his outwardly gay lifestyle. But he is ideally suited for the job he’s hired to do by Tampa’s Republican State Senator Dick Whitlock and his wife, multi-millionaire moguls of a Christian right-wing media empire.

As the election looms, the Whitlocks have been sent an envelope containing nude pictures of Dick Whitlock’s son Tony—the illegitimate spawn of an extramarital affair— involved in homosexual acts, along with a note demanding $750,000. If the money isn’t received, the sender has threatened to make the photos public. Campaglia is given carte blanche to find and stop the blackmailers. During the eight days leading up to the election, he and his dope-smoking partner, Bailey, untangle a myriad of plots that lead to a number of dead bodies—and some surprises.

The story moves at a rapid-fire pace, and Swanson offers lively descriptions of the characters. One young man has “a profile like the hood ornament on a ’56 Pontiac,” for example; another character has “sharp little predatory teeth, white as a new Kelvinator.”  Jimmy Campaglia is a likeable protagonist and clever detective.  (One wonders, though, why he puts up with his constantly high and useless partner, who seems to have been included for comic relief but is more often annoying than funny.)

Readers may find it challenging to keep track of the numerous potential villains. They should also be aware that, as in many hard-core detective novels, sexual situations occur. In this case, there are gay sex passages of the soft-core variety that might make some straight readers uncomfortable.

The Eight-Day Clock is engaging and well written, and Swanson’s depiction of the city of Tampa seems rife with opportunities for a resourceful gumshoe. Many will hope for a sequel.