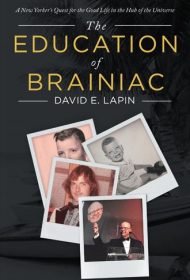 David Lapin, whom school friends dubbed “Brainiac” for his prodigious recall of facts, recounts the details of his life in this engaging memoir.

Lapin was born in 1950 into an upper middle-class family in New York City. The author recalls, surprisingly dispassionately, episodes of sexual abuse he suffered in his teens at the hands of his father, a successful businessman. His mother was Lutheran, his father Jewish, and he was brought up partly in both traditions. Later in life, though, he became dedicated to the Episcopal church. Lapin’s early sexual feelings, coming out, and relationships within the LGBT community of Boston, are major themes in his work.

After completing graduate work at Yale in political science, and following a brief stint teaching at Cornell, Lapin moved to Boston, where he landed a job as the registrar of the Community Music Center of Boston with little understanding what the job entailed. He mastered the position and eventually rose to the title of executive director, leading the music school for 34 years. He easily hobnobbed with wealthy and powerful patrons, such as long-time Boston mayor Thomas Menino and Senator Ted Kennedy. He also pursued his loves of opera, travel, and baseball.

Lapin’s memoir is roughly chronological, but also dedicates chapters to his interests such as travel and sports. He’s a lively, witty storyteller. For example, he gives a funny account of the time in church when a malfunction with the incense burner effectively ended his “career” as an altar server. On a sobering note, he gives an affecting account of his experience on 9/11. The planes that hit the World Trade Center originated in Boston, where Lapin lived, targeting his home city of New York.

Lapin’s memoir doesn’t dwell on dramatic events, such as the sexual abuse he suffered. As such, readers might wish for something more than the recounting of a relatively ordinary life. Nonetheless, this is an appealing memoir, skillfully delivered.