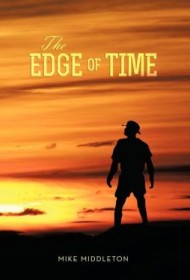 The basic plot of this Australian science fiction novel will surprise no one familiar with the genre: an innocent but enlightened alien from another planet visits this one, finds our self-serving social mores and self-destructive environmental missteps worrisome and does what he can to help benighted Earthlings see the light before it’s too late.

What saves The Edge of Time from total conventionality is its quirky, sometimes comic, love affair between the gentle creature from Lanretia and a beautiful university student named Ruth Patterson, whose parents have hired the strange young bloke who’s dropped into their midst as a handyman. For Ruth and the baffling fellow who calls himself “Thomas Jones,” the way is never easy: when he confides he’s from outer space, she thinks he’s delusional; when she pulls up her nightgown, he doesn’t know what to think. Suspended between worlds, Thomas is confused: “I must stop thinking I’m two people,” he tells himself. “Otherwise, I’m no good here and no good there.”

Author Mike Middleton was a Tasmanian geophysicist before becoming a teacher and university lecturer in Queensland and a TV science writer. Clearly, he’s an idealist. Whatever this first novel lacks in originality, sense of wonder or writing style (“There are two kinds of trees. One kind is green, something like trees on Earth”) it recovers in undiluted desire for a world aglow with good. For instance, Thomas’s native planet is a Garden of Eden where the uni-gendered, vegetarian citizens live in cozy bio-domes, spurning competition, materialism and property ownership. They spend their time making art and taking care of each other.

Middleton fills out his sci-fi fantasy with a visionary Aborigine named Bural, a helpful former Russian cosmonaut who turns out to be Thomas’s interplanetary clone and an American marine biologist who’s committed, like the others, to sustaining the earth for a while longer. The author’s plea for environmental sanity is never far from his entertaining story.