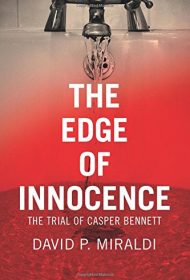 David P. Miraldi’s hybrid of historical fiction and true crime recounts a sensational trial in which his father played a leading role.

In the town of Lorain, Ohio, Florence Bennett dies a grisly death in a bathtub of scalding water a few days before Christmas, 1963. When the police arrive on the scene, they find Florence’s husband, Casper, distraught and claiming he found his wife’s corpse when he arrived home.

The Bennetts had far from an idyllic marriage, marked by Florence’s alcoholism and Casper’s ongoing affair with a bartender named Irene Miller. Contradictions in Casper’s story and potentially incriminating physical evidence lead to a murder charge against him.

The author’s father, attorney Ray Miraldi, joins Casper’s defense team. The eventful trial includes an attempt by the prosecution to make Casper lie down in the bathtub in which his wife died; a grandiose taxi driver who testifies about Florence’s alcoholic tendencies; ambiguous testimony from Irene, who was torn between protecting her reputation and her lover; and bitter clashes between the prosecution and defense. Despite strong evidence on both sides, the jury manages to reach a verdict. A year later, Ray Miraldi encounters shocking evidence that calls that verdict into question.

Author Miraldi, himself an attorney, acknowledges that no transcript of the trial exists, so he has had to fill in the gaps. He has, however, relied heavily on police records, newspaper accounts and other primary sources to reconstruct the case.

The result is a work of compelling immediacy. Miraldi avoids the melodramatic, judgmental prose that can pervade lesser true crime works. Instead, he relies on careful pacing and his deep research into the case to win readers’ interest. Without manufactured thrills, Miraldi crafts an engaging and suspenseful narrative.

The Edge of Innocence is both a gripping courtroom drama and a glimpse at a time past. It should appeal to fans of cerebral, up-market crime writing.