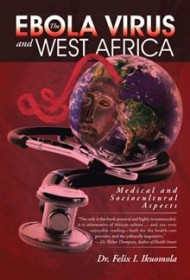 With The Ebola Virus and West Africa, Dr. Felix Ikuomola proffers a helpful handbook for those seeking to understand the West African Ebola epidemic of 2014.

In his preliminary sections, Ikuomola provides the groundwork for a basic understanding of the virus, covering such topics as the history of Ebola, its pathogenesis, and the medical procedures and standards for treatment. The author then goes on to explore the underlying causes for the devastating toll the virus took in West Africa, particularly in Guinea, Liberia and Sierra Leone.

Ikuomola cites cultural practice as one of the primary causes for the prolific spread of the virus. West African customs such as eating bush meat (think bats), dining from one bowl, washing and anointing the dead, and saving cadaver organs, all served to promote the growth of the epidemic. In addition to these traditional practices, Ikuomola discusses numerous other contributing factors, including lack of medical personnel and resources, governmental corruption and the public’s mistrust of political officials. Throughout the book, Ikuomola sets forth guidelines for changes to prevent the incursion of another epidemic.

Ikuomola organizes his book under topics which, taken as a whole, give readers an overview of West Africa’s struggle with Ebola.  While the author explores some of these topics (such as the sections on cultural mores) satisfactorily, others lack follow-through and leave readers little recourse but to turn other sources for more information.  For instance, the author asserts that the governments in the Ebola-stricken countries are corrupt, but gives no specific examples or statistics to support this statement. Ikuomola’s book also suffers from typos and some verb agreement problems. These grammatical errors are minor, however.

As it stands, Ikuomola’s volume should hold appeal for readers looking for a synopsis of the disparate ramifications and aspects of the Ebola problem in West Africa.