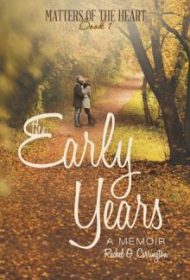 In this memoir, Rachel G. Carrington recounts the story of her relationship with her husband, Brad, one initially fraught with obstacles: a rocky courtship, his divorce, their marriage and winning custody of his three young children.

Despite her initial misgivings about Brad, Rachel pens a rosy, upbeat account of their early life together. Chapters are mostly self-contained anecdotes compiled chronologically and reading more like a G-rated romance novel than a memoir.

Born in 1930, Rachel met Brad in the summer of 1946 at the Baptist church in her small hometown of Denton, Ky. Rachel was 16 and in high school. Brad hailed from nearby Sunfish, had served in the Navy and ran a few small businesses. Although mutually smitten, Rachel soon discovered that Brad was 26 and married—although estranged from his wife—with two children and a third on the way. Rachel (and readers) learn about these complications over 11 pages written as dialogue from Brad. But the fact-jammed, overlong quotes sound contrived, and would have worked better written in third person.

Eventually, the couple marry and return to Sunfish, where Rachel managed their expanding brood (they had four more offspring, in addition to Brad’s children from his former marriage) while Brad worked multiple jobs to make ends meet.

Many details are highly personal, without the underpinning of universal truths to interest general readers; for example, the narrative includes her first address after moving to Cincinnati and details of a hand-sewn dress she made. Conversely, key details are missing, such as specifics surrounding the fact that they lived together before marrying. This was during the conservative 1940s: How did they get around inquiring landlords? What did she put as her marital status on job applications? And so on.

Rachel notes that she wrote the book “as a legacy to my family if for no other reason.” Her story will surely please family and friends, but is likely to have limited appeal among general readers.