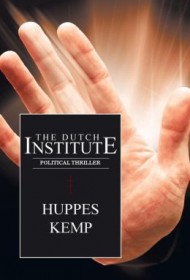 This political thriller from Huppes Kemp (husband and wife Wim Huppes and Mirjam Kemp) reveals deadly intrigue behind the scenes of the Netherlands’ state healthcare authority.

Maarten Keyser, a doctor who works for the titular Dutch Institute, is battling cancer and running out of options. He is desperate to try a promising new drug, but the government bureaucracy, headed by the corrupt Eric Stronghold, won’t allow him this lifesaving opportunity.

Maarten’s wife, Shifrah, a former Mossad operative, breaks into Stronghold’s office and finds evidence that he has been manipulating the drug approval process for financial gain. While Shifrah chases more conclusive proof of Stronghold’s malfeasance, hoping to blackmail him into approving Maarten’s desired treatment, Maarten advocates publicly for experimental drugs. Soon, husband and wife find themselves publicly vilified, then in physical danger.

The Dutch Institute’s plot and themes are a bit complex for its relatively slender length. The novel’s polemical aspects sometimes feel one-sided and shrill, and the authors might have mitigated this by exploring the intellectual and moral questions they raise at greater length.

On the other hand, the narrative poignantly evokes Maarten’s and Shifrah’s relationship, and the way Maarten’s illness affects it. (There is an autobiographical element here, as Huppes has also struggled with both cancer and the medical establishment.) Even Stronghold, though more or less a stock villain, is humanized through his devotion to his cocker spaniel.

Susie Day’s translation from the Dutch is fluid and natural, while maintaining a pleasant hint of the foreign original.

Overall, The Dutch Institute is an unusual and engaging novel. Despite its imperfections, it should appeal to fans of the thriller genre, and also to readers interested in the controversial aspects of healthcare policy.