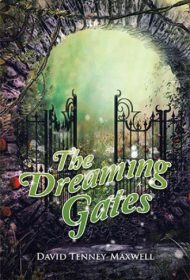 David Tenney-Maxwells’s poetry collection The Dreaming Gates documents his emotional and mental health struggles and institutionalization, his pain of rejoining the larger world and his eventual salvation through religious faith.

Tenney-Maxwell began suffering schizophrenia at age 17. His poems feature descriptive titles such as: “Inside My Head,” “Who Am I,” “Past Abuse,” and “Victories.” Many pieces include expository prologues to introduce the work.

The poems deliver raw, authentic emotion. In one prologue, the author writes of spending time in isolation after a psychotic episode and of later being moved to a High Dependency Unit, “[w]hich I describe as a ‘fish bowl.’” The poem that follows, “Loneliness of the Asylum,” portrays the mind-numbing situation: “Time ticks slowly lumbers onward/ The senses entertain with queries/[…] Another lap of the hall and a visit/ To the chair, mindless concentration…”

Readers experience the perniciousness of the voices in his head with “Voices”: “The eyes”/ They glow evil and round/ They watch from nook and nest…/And they clatter to and fro…”

Tenny-Maxwell enables readers to understand and empathize with his agonies, an achievement in itself. As poetic constructions, however, his work has several flaws. Many poems rely on familiar, rather than fresh metaphors. For example: “I’m out of my depth […]/ Still I tread and swim/ To try and stay afloat until…/ The inevitable./ That I may sink and glide downward…” Trying to avoid sinking under water is a metaphor often used to describe overwhelming emotions.

Additionally, frequently the speaker says exactly what he feels without use of specific, concrete imagery:  “Oh helplessness…what can I do?/ Oh pain…I see it…what can I do?” and, “The pain sets in/ The place is dark, the place is sad…” Vivid, creative imagery would make the work more powerful.

Tenney-Maxwell aims to target readers “who dare to want to know about this illness.” In this, he has succeeded. But this rich material could have more profound impact through greater use of poetic devices.