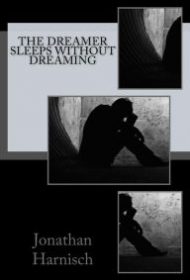 Essentially an omnibus edition including three of author Jonathan Harnisch’s previously published (and slightly revised) novels—Lover in the Nobody (2014), Porcelain Utopia (2015), and The Oxygen Tank (2016)—this narrative chronicles a man’s search for meaning in his life as he struggles with mental illness, relentless sexual mania, and soul-crushing existential angst.

Schreiber’s psychiatrist recommends that he write his fantasies down in order to understand them better, and he quickly realizes that most of them deal with his love/hate relationship with Claudia. Schreiber calls them “schizophrenic sex-and-drug skits… skuzzy-blue-movies [that are] playing in my mind all of the time.”  As Gust, Schreiber plays out his twisted fantasies with Claudia, which are spelled out in graphic detail. She is at times a neighborhood waitress, a paraplegic lover, and a cheating wife.

While the primary topic is obviously Schreiber’s illness, Harnisch brilliantly explores a variety of subject matter through Gust’s misadventures: the significance of love and friendship, the consequences of loneliness, the transformative qualities of self-evaluation, etc.

This volume isn’t exactly new material from Harnisch, and while all three novels are powerful as standalones, their similarity tends to diminish the overall narrative power when combined. Nonetheless, his strange and disturbing journey of self-awareness (and self-delusion) is brutally candid and surprisingly poignant — an unforgettable journey into the world of mental illness. Harnisch offers up pieces of his soul one thin slice at a time, delivering a story that is simultaneously profane and profound.