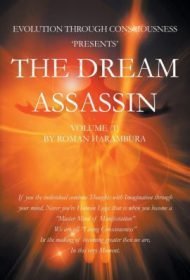 A cross between Superman and The Secret, The Dream Assassin features a spiritually oriented superhero who can manifest reality by his own thoughts.

The story revolves around a protagonist who is burnt alive, along with his wife and two children, when his house is set on fire. The protagonist, however, is resurrected by an alien being, who notes that the protagonist’s DNA has been removed and replaced with alien DNA. Now, he will be able to manifest whatever reality he desires through his thoughts.

The protagonist, who calls himself “Mystical Man,” vows to eliminate evil people, including the one who murdered his family. As the story unfolds, Mystical Man destroys evildoers by “dissipating” them (basically vaporizing them in extremely painful ways); hosts a grand magic show in which he teaches his vast audience about how imagination can manifest reality by bringing dead celebrities such as Amelia Earhart and Nicola Tesla on stage, and thwarts a major terrorist plot, among other amazing feats.

The author is an imaginative storyteller, but unfortunately, the novel is plagued by many flaws. Mystical Man delivers his theory of reality countless times in New Age verbiage that changes only slightly, such as: “…everything that has been created or manifested into the human world of physical matter is created from “Living Energy” [sic] many called it “The Formless Substance”…This “Living Energy” being the “Formless Substance” is in reality all around us and within us…that’s how I create everything, and anything through the power of my mind coupled with my greatest gift my “IMAGINATION”. (Bold and italics are the author’s.) This quickly becomes wearying, feeling more like doublespeak than any coherent philosophy.

Additionally, the story features mundane scenes that bring any momentum to a halt. For example, in one scene, Mystical Man and his helpers discuss the qualities of the hotel where the magic show will be held, including its rating, lighting switches and how they will be marked, the carpark and the “toilet building.”

Formatting is also chaotic. The author sets all dialogue in bold, uses italics seemingly randomly and spells out numbers, as in “Sixty Five (65) million.” Characters are referred to generally by their full names, in quotes and italics, throughout (“’Jasmin Forbes’ looked at ‘Phillip Dustin’…”) Grammar and spelling errors appear on nearly every page, as in: “I need to fine [sic] an address,” “prey [sic] to their God,” and so on.

A spiritual superhero is a unique idea, but the problems in the book rob the story of its potential. Readers will find this a frustrating experience, amplified by an ending, after 700 challenging pages, that turns out to be merely a cliffhanger for a planned sequel.