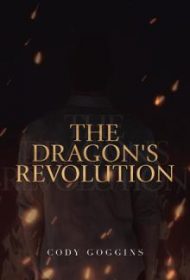 When the world goes mad with war, a teenager with magical powers fights back in Cody Goggins’ fantasy tale, The Dragon’s Revolution.

Bryce Ceribri lives in an age when a percentage of the population has magical powers; some, as in his case, are prodigies, marked as potential leaders of a peaceful planet—peaceful, that is, until a mysterious group known as MO appears, destroying military bases and disappearing as quickly as they arose. Then, just as Bryce is reaching manhood, they reappear. Luckily, Bryce now possesses powers, called Devil’s Anger, matching those of this hate-filled adversary.

To nullify Bryce’s abilities, the enemy obliterates much of his hometown and casts the blame on him, then captures him and begins a regimen of systematic torture. Yet Bryce, who has protective physical attributes, feels little pain; in fact, his foes’ attempts to weaken him may be making him stronger. After he frees himself, he and his friends use the full force of their shared powers to save lives, restore order and work to create a new environment where hate and prejudice are banished.

Goggins has a gift for imagining and conveying violent scenarios, creepy villains and seemingly indomitable young heroes and heroines. The narrative is straightforward and weighted more toward explosive combat than inner growth and perspective. At times, the large cast of characters and the almost endless methods of mutual destruction burden the story. Those who like war-drenched fantasy will likely persist, while other readers may be deterred.

Still, there are some tender family vignettes scattered amidst the gut and gore, and the central figure is admirable. Bryce can change into a huge red dragon to wreak havoc on his enemies, but in human form, he appreciates warm companionship and seeks calm.

The Dragon’s Revolution ends with significant questions unanswered, most likely presaging a sequel. Focusing tirelessly on near-cosmic combat between youthful idealists and evil forces, Goggins’ book will appeal mostly to those who enjoy combat scenes.