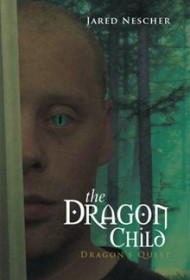 Jared Nescher is up front about the religious themes that underlie The Dragon Child, the first in a planned fantasy series. In the introduction, however, the author insists that while his Christian beliefs inform his imagined world of dragons, monsters and magic, the book is not meant to proselytize or preach. As the story unfolds, Nescher makes good on his promise, and the charming fantasy is all the better for it.

Although the novel kicks off with a genesis that echoes the Judeo-Christian creation myth (an all-knowing Creator inhabits an idyllic garden with man before an original sin), Nescher takes early turns that place the work squarely in the world of fantasy. In a dynamic narrative, the author builds an involved mythology for his imagined world, one that includes recurring Judeo-Christian elements.

Dragons play a big part in that plot twist. The mythical creatures are on the scene with humans during Creation, and conflict between humans and dragons arise from the beginning. But an unlikely alliance between the races in the form of a hero named Jorn and a dragon-queen named Kirianadreth results in the half-dragon, half-human named, appropriately enough, Dragon.

The heart of the story lies in Dragon’s struggle to fit into two worlds. Specifically, he must find a way to balance his loyalty to both dragons and humans. This existentialist crisis comes with challenges that mark any fantasy novel worth its salt – namely, an epic battle between the forces of good and evil. In Nescher’s world, that large-scale conflict bears an undeniable likeness to New Testament allegories and morality. Happily, those ties don’t get too much in the way, largely thanks to Nescher’s narrative flair. Just as C.S. Lewis created universal stories with religious themes, Nescher makes good storytelling a priority.

Although the involved mythology may dissuade casual genre readers,The Dragon Child marks a solid debut. Nescher’s novel will likely be enjoyed by any devoted fantasy fan.