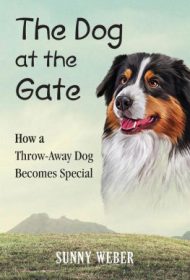 As a young puppy, Max must leave his mother behind when he becomes a present for a bratty little girl and her more affectionate younger brother. The adults in Max’s new family are unfeeling and often cruel, and they eventually abandon him to a shelter. Just as his time is running out, he gains a foster home – and eventually a forever home – through a rescue group.

Max learns to compete in dog shows under the tutelage of his new mistress and makes friends with the other animals in the house, even a snooty poodle mix named Muffin. Through these experiences, Max builds character and ponders the meaning of death – those of others and his own.

Tear-jerking animal bildungsromans are a staple of children’s literature, from Black Beauty to The Call of the Wild. The subgenre tends to end when its protagonists find their places in the world. Adults should be aware that The Dog at the Gate departs somewhat from this norm. Although the ending is still hopeful and doesn’t compromise the book’s quality, it might upset impressionable young readers.

That said, another animal death (of one of Max’s cat friends) is abrupt and senseless. Though perhaps realistic, and in a way in keeping with the book’s themes, the random nature of the death feels out of place with the genre’s inherently didactic nature.

Weber’s writing is clear and often poignant, particularly when describing Max’s longing to reunite with his mother (e.g., “Every night I dreamed of [her] and remembered her soft tongue, loving eyes, and warm tummy. Sometimes I woke up in the middle of the night and remembered she was gone forever. Then I cried”).

While some revision to address the issues mentioned would widen the story’s appeal, The Dog at the Gate offers a number of rewards, including an engaging plot and compelling narrative voice.