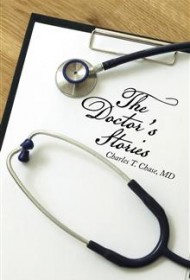 In naming his book The Doctor’s Stories, neurologist Charles T. Chase invites comparison to William Carlos Williams, the Pulitzer Prize-winning poet and physician to whom Chase pays tribute for having “perfected the genre” with the similarly titled The Doctor Stories.

Both men write about their patients. But while the 13 stories in Williams’ collection were richly detailed and brimming with humanity, Chase’s 31 are more like sketches, each around six or seven pages long. Fewer, more fleshed-out stories might have made for a more satisfying read. Even so, many succeed, among them the tale of a devoted husband whose wife of 50 years suffers from Alzheimer’s disease. Though she can no longer speak, read, cook, keep house or even take herself to the bathroom, the couple makes a joyful discovery: She can still dance. Another tells of an indigent young man with epilepsy whose life is saved by his best friend, a collie-Golden Retriever mix named Rex that can sense his master’s impending seizures.

Chase is an affable storyteller, but his lack of compassion for some patients detracts from his accessible writing style. Called upon to inform a couple that their newborn has an undeveloped brain, for example, Chase “paused because, honestly, the last thing I wanted to see was a two-day-old infant looking like a train wreck.”

Chase also avenges a colleague unjustly sued for malpractice after he recognizes a referral patient as the lawyer who brought the suit. Rather than minimize his discomfort during a diagnostic test, Chase amplifies it, choosing the thickest needle and turning an electrical stimulation machine to its highest setting. “I felt like a torturer. It felt pretty satisfying.”

Such moments will likely alienate many readers, particularly those who are patients (rather than doctors who might more readily relate to Chase’s mindset). Nonetheless, fans of medical stories who can overlook the hit or miss nature of the selections will find enough compelling tales here to make the read worthwhile.