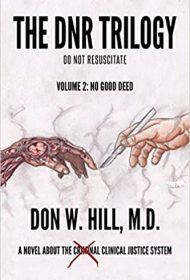 The second installment in Don W. Hill’s DNR trilogy continues the story of J.D. Brewster, an intelligent but abrasive Houston medical student whose training at a local hospital reveals widespread corruption throughout the medical system.

Set largely in the 1980s, the story essentially chronicles the beating down of the young doctor-to-be’s spirit: detailing how numerous events lead him to become a “morally challenged” troublemaker, someone whose “respect for life and for Homo sapiens in general was clearly on the wane.” The brutal assault and subsequent death of a beloved nurse by black supremacists, participating in the cover-up of a vicious murder of an incarcerated patient, and a hospital director getting away with sexual assault, among other things, leads Brewster down a dark path.

Brewster’s sarcastic sense of humor fuels the narrative throughout. Says the protagonist, who likes very large women: “I took a girl of such gargantuan proportions down to the beach at Galveston on a Saturday afternoon date a few years ago. As we walked upon the beach, amateur paleontologists followed the woman’s tracks as if she was a resurrected wooly mammoth.” Such moments are sure to offend many readers. Additionally, some of the medical-powered humor will go over readers’ heads: “I’m quite certain that the woman was little more than an enormous diflagellated prokaryotic microbe.”

Oddly, the author barely references previous prominent plot threads, namely a professor’s search for Bigfoot, the consequences of a doctor’s rescue from a Mexican drug cartel, and Brewster’s “great sin,” referenced 22 times in the first novel yet never mentioned in the second. Lastly, the novel just arbitrarily ends, leaving readers in a state of limbo.

Although the gonzo fiction feel of Brewster traversing through the underbelly of the medical industry is powerful, the main character’s overt racism coupled with some gratuitous medical scenes is problematic. Those who can stomach Brewster’s prickly demeanor will hopefully find the end of his journey of self-discovery in the third installment.