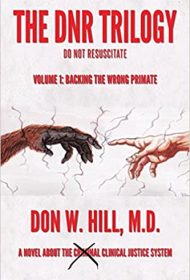 The first installment of Ron W. Hill’s DNR trilogy—a brash fusion of medical drama, fictionalized memoir, and political and social commentary—chronicles the life of an aging, outspoken Texas doctor as he battles soul-crushing guilt and suicidal thoughts from a “great sin” he committed years earlier.

Set largely in the early 1980s, the story revolves around J. D. Brewster, a highly opinionated student in a dual-training MD/PhD program at Gulf Coast College of Medicine at the Texas Medical Center in Houston. His contentious beliefs are on full display when he describes a local television personality who, he says, is “usually doing interviews with homophobic transsexual Catholic priests that used to be celibate lesbian nuns, or maybe misogynistic satyrs with no less than four florescent testicles… Let’s not forget about…card-carrying members of the Democratic Party, and other kinds of retarded and kinky-kind of shit like that.”

His beliefs make him a “lightning rod” and land him in the middle of numerous dumpster fires, like the morally questionable machinations behind a hepatitis B vaccine study, violence perpetrated by black supremacist criminals, and the search for a Texas Sasquatch.

Throughout Brewster’s misadventures, his sarcasm and politically incorrect sense of humor help him through the existential quagmire. All events lead to a mysterious “righteous act of justice” that will change his life forever.

The storyline has a serpentine, at times, directionless feel to it. Numerous scenes veer off into tangential anecdotes (including discussions of Seuss’ Grinch, pecan pie, the Texas bloodlines of characters, etc.), many not all that important to the main storyline. One character describes this issue fittingly: “…maybe I’m getting off track.”

Lastly, the complete lack of a conclusion—coupled with so many unresolved and seemingly disparate plot threads—may disappoint and/or irritate more than a few readers.

That said, adventurous fans of unconventional fiction curious to see where this strange storyline leads will likely seek out the second book in this trilogy.