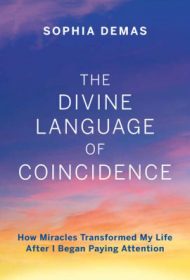 How do miracles happen? A grateful Greek-American explains the process through the events of her own lucky life in this captivating memoir.

“These things only happen to you,” Sophia Demas’ friends are wont to say. They marvel at how she gets the right mentor, the perfect living arrangement, just enough money to pursue her latest plan. She credits her good fortune to her faith in “an entity that pervades all realms and all living things…” By prayerfully listening to and trusting this entity, and sharing her blessings with those in need, Demas experiences miracles, from the complete healing of a persistent cyst on her eyelid at a Greek Orthodox Lenten service to escaping certain death in a mudslide on her honeymoon due to a missed flight.

In college, Demas is deeply influenced by R. Buckminster Fuller’s book, No More Secondhand God. When Fuller lectures at her university, they meet, and Fuller tells Demas, “Darlin’, [my wife] Anne and I have taken a shine to you.” This begins a valuable relationship that draws Demas from a sheltered life with her Greek-immigrant parents in Oregon to an independent and decisive life on the East Coast.

For subsequent successes in business and love, she also credits A Course in Miracles, the publication of Jesus’ teachings as channeled through a Columbia University clinical psychologist. Further study of quantum physics explains how “anything is possible when I connect with Divine Consciousness, our Creator who resides in sound, light, and vibration.”

This book moves seamlessly between clear, concise explanations of how miracles happen and Demas’ life story, told at a breathless pace. The author is a talented storyteller, whose vivid writing entrances. Describing a trip abroad, she sees “the narrow canals veining through a Venice drenched with art like an old countess dripping in her jewels.”

For its colorful narration of a fascinating life, this book is sure to satisfy memoir fans, as well as seekers desiring a credible, tested path to fulfillment.