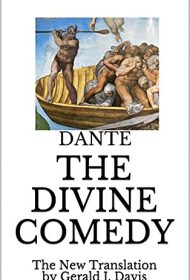 It seems impossible that in the 700-plus years since Dante Alighieri wrote his famous poem, The Divine Comedy, a translator could present something new. Novelist and translator Gerald J. Davis, however, has produced a prose version without a single footnote, revealing something many scholars missed: The Divine Comedy is a great read!

For centuries, scholars have scrutinized each of the poem’s 14,233 lines, and translators have produced new rhymed versions, stretching their native languages to mimic Dante’s unique poetic form. Academic volumes include so many footnotes that each of Dante’s three sections – The Inferno, Purgatory and Paradise – require separate books. The Oxford Press version, for example, has 2,231 pages and weighs 8.2 pounds.

Davis’ three-page introduction provides all the history readers need to join Dante and his guide, the Roman poet Virgil, in their journey through the Inferno and Purgatory. As Davis goes on to describe the many sinners Dante meets in the circles of hell, he avoids both colloquialisms and archaic language, yet retains Dante’s tension and poetic style. As Dante and Virgil enter hell, for example, they hear “sounds of pain, utterings of agony, voices high and hoarse, together with the thump of punishing blows…”

Davis’ The Divine Comedy also highlights romance. When Dante reaches Paradise, his guide is Beatrice, the woman he had loved from afar since they were both children, until she died at age 24. Despite the beauty surrounding him, Dante can look only at her. “Vanquishing me with the radiance of her smile, she said onto me, “Turn about and listen. Not only in mine eyes is Paradise.”

Readers who have avoided hefty annotated versions of The Divine Comedy should feel at ease reading Davis’ straightforward paperback. And, with this impressive new translation, those who slogged through older versions will finally be free to enjoy Dante’s marvelous storytelling.