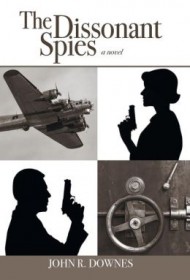 This novel, set in 1942, asks the question: Can the Nazi spy team of Colonel Lukas Schott, an aristocrat “country gentleman,” and Major Rebekka Bader, a “pathological killer,” manage to sneak ashore in the United States, make their way undetected to Minneapolis and steal the top-secret Norden bombsight?

We know they’re doomed to failure. But that didn’t stop Jack Higgins in The Eagle Has Landed, an otherwise incongruous espionage tale, from hitting the bull’s eye with ingenious plot twists, mounting conflict and breathtaking pace.

Unfortunately, Downes’ story isn’t as successful. Plot flaws become apparent within the first few pages when Rebekka murders the agent who provides disguises and forged IDs to recently landed spies. She then leaves a headline-grabbing trail of bodies in their wake. Like the spies’ assigned on-location team, she has a “zeal for random and unnecessary criminal acts.” But this high-priority mission obviously calls for stealth! Readers, and eventually Colonel Schott, wonder how Berlin could “have missed the obvious signs. . . Surely, espionage candidates with such apparent abnormalities would be weeded out. He’d discovered them easily enough.” The issue might have made sense if Rebekka were a last-minute substitution and the team of thugs an unhappy coincidence . . . but the revelation that Berlin planned it this way just doesn’t work.

Where character-based conflict could have built tension, too often there’s pedestrian reportage: “Rebekka needed to decide whether to remain in place and watch the procedure from the previous day play out, or follow the Hudson to learn who the woman was…”

Finally, a distracting overuse of italics makes readers pause to consider their importance and creates speed bumps in the novel’s already slow flow.

There’s the seed of a good idea here, but regrettably, these flaws combine to make the novel less engaging than espionage fans are likely to appreciate.