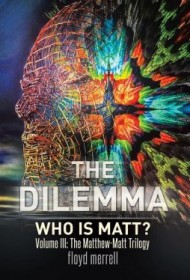 Floyd Merrell’s novel revolves around a young man of mixed Anglo and Latino heritage who struggles to put his growing philosophical understanding of life to use in his supermarket job.

Matt, the title character, is the product of a deeply fundamentalist religious upbringing. Matt (originally known as Matthew), rejected his family and went on a spiritual journey in Mexico, where he met his present wife Maria. He has returned to the States and is employed as a produce manager at a supermarket. His attempts at novel writing frustrated, he finds a way to express his creativity by making unusual signs highlighting the store’s products. He also introduces Latino cooking styles to the store, which sparks controversy from some employees and customers. Matt draws on his mixed heritage and friends to get through several challenges, including a psychopathic employee and Maria’s kidnapping.

Matt is an introspective, thoughtful young man whose ideas about mestizo or mixed heritage, what he later calls “Amerexican” culture, make for interesting reading. His inner monologues when explaining his ideas to the store managers are also amusing, as he expects them to be rejected, when in fact the managers are deeply intrigued.

However, while this novel raises many thought-provoking points, they are often only tangentially related to the narrative, which unfortunately relies on telling instead of showing. For example, when Maria is kidnapped, the reason behind the action is summarized instead of dramatized. Additionally, the author’s more philosophical thoughts on relationships and creativity are difficult to understand; indeed, many of the characters he talks to about them can’t grasp his ideas.

With the Latino population in the U.S. expected to grow significantly, this novel, if revised, could greatly contribute to cross-cultural conversation. As it stands, however, the book may prove challenging for many readers.