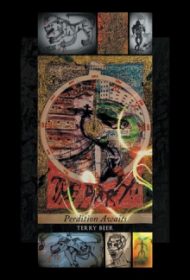 Terry Beer’s debut novel—17 years in the making—is a doorstopper of a read that melds dark fantasy, existential horror, and speculative fiction.

The story, more than 900 pages, chronicles the epic redemptive quest of a tortured soul on a mission to get another chance at life by manipulating a far distant relative from the future (approximately 2016) to return to her rightful home, a nightmarish, otherworldly place known as the Cauldron. The Cauldron began as an impregnable penal institute built in 1670 where thousands of the world’s worst criminals were horrifically killed.

Elfie Odges, who has been an incorporeal entity for “forever and a day,” is offered another chance at life with his beloved wife and kids. All he has to do is right a wrong. Rosina Russell—a young woman fated to serve the power of darkness—has repeatedly escaped the clutches of the Cauldron. Elfie, who is the woman’s great-great-great-grandfather, must return her to the Cauldron.

The quest becomes complicated, however, when Rosina’s attempts to connect with and free the spirit of her father Daniel, who recently died in a car accident trying to save a friend, endangers Rosina, Daniel, Elfie and others to an eternity of torture. At story’s center is the Diary, a “book of pure evil” that ensnares in its dark clutches those who open it.

Fans of dark fantasy will enjoy Beer’s rich description and the horror-nuanced tone throughout. However, the novel’s grand-scale nature—coupled with a serpentine storyline—negatively impacts momentum in places. Beer offers great detail regarding many of the main characters’ backstories, as well as the Diary’s extensive history; while this adds depth, the pacing slows markedly in places, and the story could use trimming.

Still, the novel’s deeply philosophical nature, a cast of memorable characters (the testicle-collecting psychopath Big Jimmy “The Wave” Tidal is particularly noteworthy), and a thematically powerful conclusion ultimately make this an entertaining, if somewhat bloated, read.